Huntington Station – The history-based play “Harriet, Rosa and Me” received a rousing reception at its world premiere February 16, performed as part of the Town of Huntington’s 30th annual Black History program.

Written and produced by Grammy and Emmy-award winning director J.D. Lawrence, the musical play tells the story of a high school student named Hope who skips school to avoid attending her Black History class, only to encounter a woman named Rosa (as in Parks) at a bus stop and a woman named Harriet (as in Tubman) at a subway station. Together, they show Hope the importance studying Black History and highlight some of the women of color who have left indelible stamps on history, ranging from an Egyptian pharaoh to women who have run for U.S. president.

“How many of you learned something here?” Lawrence asked the audience of more than 400 people at Jack Abrams STEM Magnet School. When almost all of the audience raised their hands, Lawrence responded, “It is 2017, we have to do better….This is everybody’s history. It is not just Black History. It is American History

In a public career spanning 40 years, Miller served as the Town’s director of minority affairs. She was also honored for her roles in many community organizations, including the Huntington Branch of the NAACP for which she is a past president. She has also served on the boards of Long Island Cares, the Huntington Arts Council, the Family Service League, the Huntington Community Food Council and the National Council of Negro Women.

Payne, a longtime Greenlawn resident, is a former editor, reporter and columnist at Newsday who directed coverage that won every major journalism award, including six Pulizter Prizes. He is a founder and past president of the National Association of Black Journalists and the founder of The Trotter Group, a national organization of African-American writers of newspaper commentary.

Special thanks were given to Huntington Toyota, the sponsor of the evening. 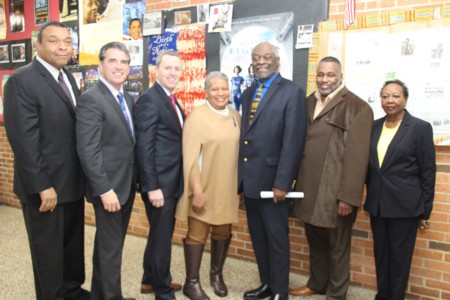