Huntington Town officials joined friends, family and members of veterans groups April 24 in dedicating a bench at Town Hall’s Veterans Plaza in memory of Mario Buonpane, the longtime chairman of the Town’s Veterans Advisory Board, who passed away in September 2015 at the age of 83

During a ceremony moderated by Bill Ober, who succeeded Buonpane as Veterans Advisory Board chairman, Msgr. Thomas Colgan of St. Philip Neri R.C. Church blessed the bench. Town Council Members Mark Cuthbertson and Susan A. Berland delivered reminiscences of Buonpane. His son, Mark, speaking on behalf of the family, spoke of his father’s efforts in creating Veterans Plaza, first as a memorial to Huntington residents who served in World War II, and expanding it in subsequent years to honor those who served in the Korean, Vietnamese and Gulf Wars.

Buonpane served in the Army during the Korean War and later worked as an engineer at the Grumman Corp., where he helped design parts of the Lunar Module for the Apollo space program. He served as Post Commander of the Northport American Legion Post #694 and as a member of its board of directors. In 1995, he was named chair of the Town’s Veterans Advisory Board, a post he held until his death. 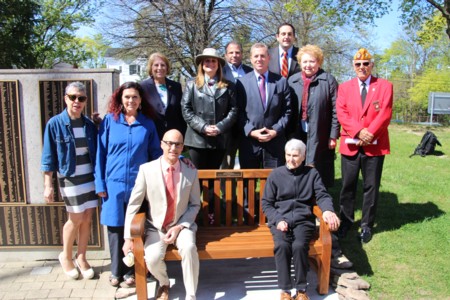