A Huntington Station tavern plagued by longstanding violence and numerous health and safety violations has abandoned efforts to fight a pending revocation of its liquor license and instead voluntarily forfeited the license to state regulators, Huntington Councilman Mark Cuthbertson announced this week.

Due to the forfeiture last week, the owners of Melissa Tavern will no longer be permitted to serve alcohol at the troubled location. For months, Councilman Cuthbertson has led local efforts to urge the New York State Liquor Authority to revoke the license as part of an effort to curb violence at the tavern and restaurant.

“This is great news for the Huntington Station community and I applaud our police, civic leaders and residents who assisted the Town in applying constant pressure to put an end to violence and crime at Melissa Tavern.” Councilman Cuthbertson said. “For far too long, this establishment has been a detriment to the quality of life for Huntington Station and I am pleased to announce Melissa’s last call is history.”

Faced with the issuance of 28 new violations, owners of Melissa Tavern November 17th surrendered its liquor license at a court hearing in Nassau County. “Our first priority is public safety and I am pleased that the Town had the support of the New York State Liquor Authority16, the Suffolk County Board of Health and the Suffolk County Police Department,” Cuthbertson said.

The Councilman first requested the Liquor Authority revoke the tavern’s license on July 18, 2016 following a string of violent crime ranging from menacing to homicide. In March of this year, a shooting occurred in the parking lot behind Melissa. In late September, Suffolk Police were once again summoned to the tavern following a stabbing. And in the early hours on October 22 shots were fired inside and outside of the Tavern.

Councilman Cuthbertson concluded, “We can all breathe a sigh of relief that due to the actions of the NY State Liquor Authority and the Suffolk County Police Department that it’s finally last call for the sale of alcohol at Melissa Tavern.”

The tavern, located at 1419 New York Avenue, has been cited for 127 separate incidents [filed with the Suffolk County Police Department] that span a five-year period. The Melissa Restaurant/Tavern is managed by the El Paraiso Elvira Corp. 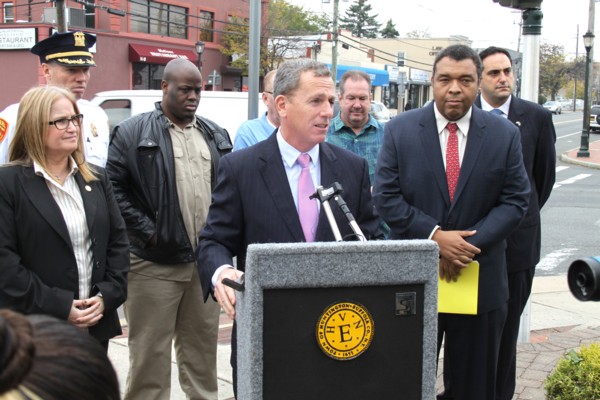