The Huntington Town Board joined members of the Town’s African-American Historic Designation Council on December 8, 2015 in unveiling the historic marker in front of the house where Jupiter Hammon, America’s first African-American published poet, spent the last years of his life. 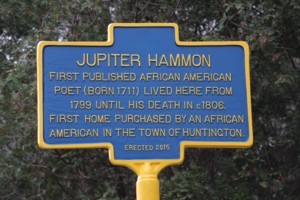 Hammon (1711-c.1806) is considered the first African-American writer to be published in the United States. His first poem was published in 1761. He published three other poems and three essays.

Hammon was born into slavery in Lloyd Neck and shared a close relationship with the Lloyd family. He went to school with the Lloyd children and worked alongside Henry Lloyd. After Henry Lloyd’s death, he went to live with Henry’s son, Joseph. Patriots, they both fled to Connecticut during the American Revolution and returned after the war. Hammon continued to write poetry and prose and became a leader in the African American community.

The house, at 73 West Shore Road, was built between 1790 and 1995. It was purchased by Hammon’s great-nephew in 1799. The marker notes it was the first house purchased by an African-American in Huntington. The 1800 census lists Hammon as head of the household. Last year, at the request of the Historic Designation Council, the Town Board placed a historic designation on the house, preserving it.