The Town of Huntington's Annual Tulip Festival will take place this Sunday, May 1, 2016 from 11AM – 4PM in Heckscher Park in Huntington.

The Tulip Festival, now in its sixteenth year is organized by the Town of Huntington, with Chief Festival Sponsorship support from Astoria Bank.  The free festival will have children’s activity booths and live performances on the Chapin Rainbow stage, presented courtesy of the Huntington Arts Council. 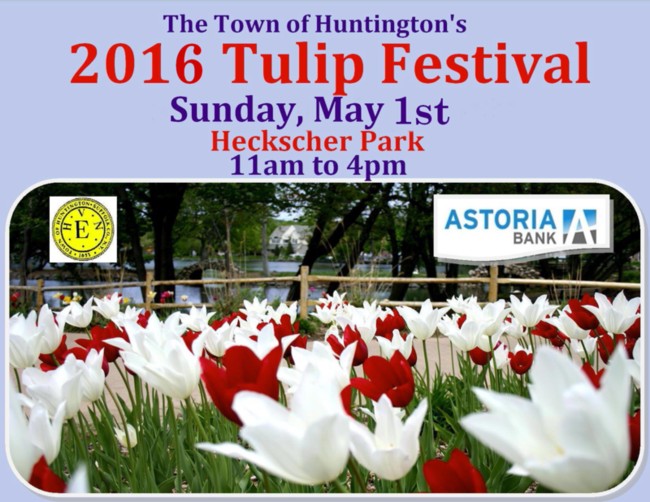 1:00-1:45 - Chapin Rainbow Stage Performance:  “Casplash” – Caribbean splash band with Steelpanist Rudi Crichlow – “Casplash” – a/k/a “Caribbean Splash” – plays music made for dancing – from Calypso, Soca, and Reggae to Pop, Funk, R&B and more.  Casplash takes audience members on a fantastic musical escapade via the beautiful sounds of the steel pan, soulful singing and hot tropical rhythms.  The band leads audiences in familiar dances such as the Electric Slide, Hokey Pokey, Conga Line and Limbo; they also teach a traditional West Indian follow-the-leader style dance called Brown Girl in the Ring.  Casplash is founded and led by Steelpanist Rudy Crichlow, a man whose roots are in Trinidad and Tobago.  The band has performed at festivals, performing arts centers and special events throughout the New York Metro area and the United States.  Presented by the Huntington Arts Council.* Sponsored by Astoria Bank*

2:00-3:00 - Chapin Rainbow Stage Performance:“Songs & Puppetry” with Janice Buckner – Janice is one of the nation's top performing artists for children.  She tours nationally, appearing on over 150 stages each year receiving top ratings.  She has appeared on radio and television, as well as over 4000 schools and concert halls.  She entertains audiences of all ages with her voice, guitars, puppets and her knowledge of Sign Language for the Deaf.  She is noted for her voice, her creativity and the outstanding quality of her lyrics.  Her Learn Along Song Series includes eleven CDs & songbooks and her Creativity in the Classroom Work/Play Book with a 20-song CD is used by pre-K and elementary school teachers throughout the country.  Her Learn Along radio show aired out of Hofstra University for seventeen years and was heard around the world via the internet.  Presented by the Huntington Arts Council.* Sponsored by Huntington Honda