The markers, in the municipal parking lot between Broadway and Gaines Avenue and at the intersection of Taylor and Boulevard Avenues, note several houses Ballton built near each location.

Samuel Ballton was born into slavery in Virginia. He escaped the South during the Civil War and eventually settled in Greenlawn in 1873, where he started as a tenant farmer for one of the Town’s wealthiest landowners. Later, while employed as a shareholder for the owner of the largest farm in Greenlawn, he gained much attention by growing record numbers of cucumbers and cabbages. He earned the nickname of the “Pickle King” as a result of growing and processing 1.5 million pickles in one season.

Moving beyond tenant farming, Mr. Ballton was able to gain capital while serving as buying agent for a large Boston pickle house. He began to buy land and houses near the new railroad line, which got him on the path toward being a successful landowner, entrepreneur and founding member of the Greenlawn community. He died on April 30, 1917 at the age of 79.

Following the ceremony, Town Historian Robert Hughes led a walking tour past some of Mr. Ballton’s houses, starting at the Smith Street marker and ending at the Taylor/Boulevard Avenues one. A reception was held following the tour at the Harborfields Public Library. 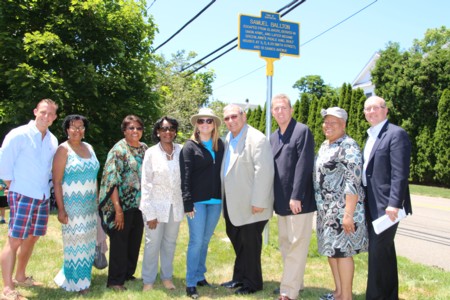