The newspaper, which continues to publish, began in 1838, when Walt Whitman purchased a printing press in New York and began to publish the paper, on an unpredictable schedule – sometimes weekly, sometimes biweekly and sometimes every three weeks. He did the writing, editing, typesetting, printing and delivery. The headquarters was a barn near the location of the historic marker, in the Gerard Street municipal parking lot.

Supervisor Petrone, in brief remarks, thanked the Press Club of Long Island for providing the marker, with financial assistance from the Zimmerman Edelson Public Relations firm and the law firm of McCarthy and Reynolds. He noted that the Press Club has been trying to get historic markets at significant sites in Long Island journalism history. This marker is the second site; the first was the garage that provided Newsday’s first headquarters. The Supervisor noted that he hoped children would see the marker and ask their parents about the newspaper and about Whitman, whom Huntington proudly calls its native son.

In his remarks, Rep. Israel spoke of his affection for Whitman, noting that he has a framed cover of Whitman’s poetry collection, Leaves of Grass, framed in his office in Washington. The cover, he noted, was a gift from the Whitman Birthplace executive director Cynthia Shor.

Also speaking at the ceremony were Shor; Bill Bleyer, chair of the Press Club’s historic site committee and current Long Islander publisher Peter Sloggatt. The birthplace was also represented by its board chairman, Dr. William Walter, and by Whitman recreator Darryl Blaine Ford. 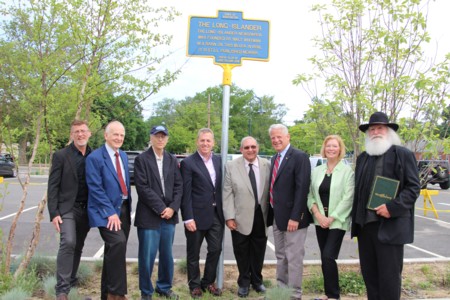