Passengers will be able to ride the Town of Huntington’s HART buses for free during two weeks later this month, a move Town officials hope will encourage residents to consider HART as an alternative to driving their own cars to work or shop. From Monday, September 21 through Saturday, September 26, and again from Monday, September 28 through Saturday, October 3, there will be no fare charged on HART’s fixed route buses. The promotion is being held in coordination with International Car Free Day on September 22. That is an annual event celebrated in over 1,500 cities in 40 countries during which people are encouraged to get around without cars and instead use alternate transportation such as transit, biking or carpooling. 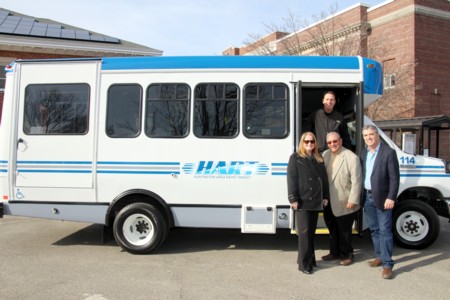 Locally, Car Free Day Long Island will be celebrated for the third consecutive year under the auspices of Transit Solutions and 511NYRideshare, who are partnering with the Town in presenting the Fare Free Weeks. The goal of the promotion is to increase ridership on HART (Huntington Area Rapid Transit), the only town-operated bus system on Long Island. HART, which has been operating since 1978, revised its routes in January 2013 to adapt to changing demand, improve service and reduce waiting times. This year, HART upgraded its fleet, putting 15 new vehicles into service, including seven 20-passenger clean diesel buses that provide easier maneuverability, greater fuel efficiency and easier passenger access than the 29-passenger vehicles they replaced. HART also has three hybrid buses that are part of the fixed-route service.

Fare Free Weeks was authorized by a Town Board resolution that passed unanimously at the July 14 Town Board meeting. The resolution noted that the Town would seek sponsorships to offset the lost passenger revenue.  Organizations that have agreed to become Fare Free Weeks sponsors are: Covanta Energy; Stop & Shop; Target; The Paramount; Renaissance Downtowns; Clever Devices; the Huntington Township Chamber of Commerce; and the Huntington Station Business Improvement District. The free rides are available only on fixed route service. Paratransit is unaffected by the promotion. For details on routes and schedules, riders can visit the HART Bus page.  See more at: