Collections Increase as Town Makes it Easier to Recycle

Two major changes affecting how Huntington residents recycle paper, glass, bottles and electronic waste produced significant increases in 2015. At the beginning of 2015, the Town began single stream recycling, allowing residents to put all recyclables into a single can, which is collected weekly. Previously, residents were required to separate bottles and cans from newspapers, magazines and cardboard and put them out for collection on alternate weeks. As a result of this change, which made recycling more convenient, the amount of recyclables collected increased by just under 10 percent: from 13,327.44 tons collected in 2014 to 14,609.23 tons in 2015. 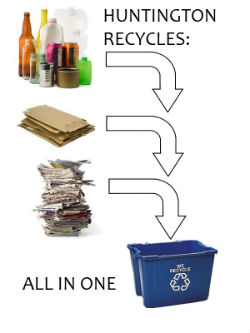 The second change applied to electronic waste such as televisions, computers, computer printers and monitors. For many years, the Town has accepted e-waste at the Town’s Recycling Center, 642 New York Avenue, Huntington, and in 2013 began a program of allowing residents to call for curbside pickup. On January 1, 2015, a state law took effect making e-waste recycling mandatory by banning the collection of e-waste with regular garbage. The Town and its contracted refuse carters began placing stickers on e-waste left out with regular garbage informing residents of the law and listing the options for disposal, including drop-off at the Recycling Center, curbside pickup, taking it to a participating store and sending it back to the manufacturer. As a result, calls for curbside pickup nearly quadrupled in 2015, with 2,391 calls, as compared to 643 in 2014.