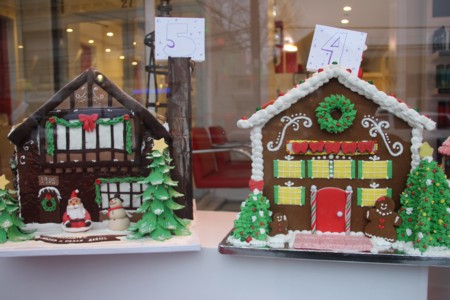 An updated interactive map, a new Holiday Parade Facebook page, an expanded gingerbread house competition, and a scavenger hunt are among the additions to the festivities for the Seventh Annual Holiday Parade and Street Festival in Huntington Village November 26th. The days’ worth of entertainment and activities starts with Small Business Saturday, continues with Long Island’s Largest Electric Light Parade and features Santa’s arrival at the end of the parade.

The interactive map, which people can access online through their smart phones and tablets, will provide information about participating merchants and any offers they might have related to Small Business Saturday or the Holiday Parade. Last year, 25 merchants signed up to be a part of the map and offer deals for the Holiday Season. Any merchant wishing to participate this year can download an application on the Town’s website or on the new, soon to go live, Huntington Holiday Facebook page. The map site received a total of 2,789 “hits” last year, including 1,239 on the day of the parade and festival.

The new dedicated Facebook page will help the Festival expand its social media presence and give those who are coming to the parade a new avenue to obtain information. A coupon sheet will be on the page, with deals from around the village for people to print out before the parade and festival; as well as any applications will be up there as pictures for people to download.

Bakeries throughout the town will be invited to take part in the 2nd Annual Gingerbread House competition. Last year, five bakeries participated; the entries were displayed in a store window on Wall Street for a public vote. With more than 400 ballots cast, Greenlawn’s Fanny Cakes was declared the winner. After the festival, all of the entries were displayed in the lobby of Town Hall through December and January. The display was a popular attraction for Town Hall visitors.

“Each year, new events and features get added to make the day even more special, and this year is no exception, with the expanded gingerbread house competition and additional activities for children,” Huntington Supervisor Frank P. Petrone said. “That’s why people from all across Long Island come early and stay late for an entire day of family fun.”

The parade, which draws between 5,000 and 10,000 people to the Village, will kick off at 6 p.m. from the Big H Shopping Center on New York Avenue and will proceed north to Main Street and then west on Main Street to West Neck Road.

The parade will include competitions for the best floats in several categories, with judging based on how well they follow the theme of the parade, “Cartoon Holiday.” The friendly competition among fire departments is particularly fierce, because the winning department gets to choose who gets to play Santa Claus in the 2017 parade. Businesses and organizations are also encouraged to participate.

By popular demand, The North Shore Pops, which calls itself Long Island’s favorite concert band, will again perform immediately after the parade, playing in front of the holiday tree, which has become a popular picture and gathering spot throughout the holiday season.

The Pops’ performance will be one of many throughout the day, with carolers strolling through the village. There also will be musical performances on and in front of the reviewing stand before the parade.

After the tree lighting ceremony, the festival will continue on Wall Street. A DJ will take over to maintain the festive mood, as children pay a visit to Santa Claus, get their faces painted, play in the bounce houses, or enjoy a free cup of hot chocolate, compliments of Christopher’s Restaurant, Almarco and Huntington Panini. There will also be holiday crafts and activities at both the Huntington Public Library and Panera Bread, starting at noon.

Free parking will be available at the Huntington train station, with a convenient free shuttle from 5 p.m. to 10 p.m.

Merchants wishing to sign up for the interactive map can download the application.  The deadline for signing up is October 30.

Groups or companies wishing to be part of the parade can download that application.

Both Home Bakers and Commercial Bakers can download their application.

Rules for the Gingerbread House Competition can be found here.

The Huntington Holiday Parade and Festival Facebook page can be found at www.facebook.com/HuntingtonHolidayParade.