The Town of Huntington wants to remind residents and businesses that the October 31 deadline is approaching to fill out an application for the Second Annual Gingerbread House Competition, one of the many activities in Huntington Village November 26 that is part of Holiday Parade and Festival.

The Town and the Parade and Festival committee also announce the prize for the winner in each category – commercial bakeries and home bakers – and the panel of expert judges to select the finalists. The winners will be decided by the public, who will be asked to cast ballots after viewing the displays of the finalists in two storefronts on New York Avenue the day of the parade and festival. The winners will be announced at the annual tree lighting that follows the parade.

Last year, more than 400 people cast ballots for the winner in the only category – commercial bakeries. The competition proved so popular that the committee added the second category, home bakers, for this year, as well as prizes for the winners. The winning commercial bakery will receive a VIP Box for seven for a concert at the Paramount Theater, performance to be announced. The winner of the home baker group will win a new KitchenAid Artisan Mixer.

Expecting a large number of entries, particularly in the home bakers category, the committee has assembled a panel of distinguished judges to select the finalists whose work will be displayed for the public vote. The panel includes: Assistant Professor Richard Amster from the Suffolk County Community College Culinary Institute; Chef Franco Sampogna from Jema Restaurant; Executive Chef Alexander Chernikov from IMC Restaurant & Bar; pastry chef Joe Baldanza, one of the owners Mr. Sausage; and Northport teenager William Connor, who will be featured this month on Food Network’s “Chopped Junior.”

After the parade and festival, the finalist entries will be moved to Town Hall, where they will be put on display through January, providing significant exposure not only for the winner but to all of finalists. Last year, thousands of visitors marveled at the six bakery entries as they passed through the Town Hall lobby.

Both Home Bakers and Commercial Bakers can download the application.
Rules can be downloaded here. 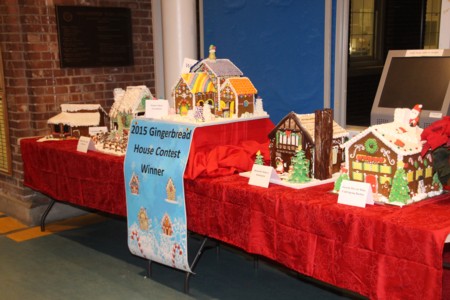